Their stories, my words – writing my ancestors stories 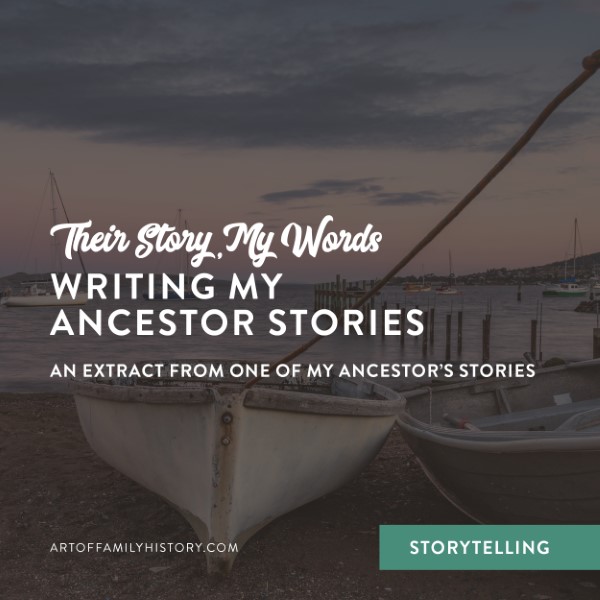 This week’s blog post is going to be a little bit different to the usual ones. I won’t be sharing any tips, tricks or great new templates that I’ve added to the resource library. Today I wanted to talk about how I write my ancestors stories. To do that, I’m sharing an extract of my current writing project about my 2x great-grandmother, Hannah. I don’t know a lot about her and have only been able to piece together a few concrete facts. But I still want to tell her story because it’s a crucial to our family history.

I know that many of you have the same frustrations when it comes to your ancestors. How do you write their story when you don’t have all the information? If only we all had a TARDIS! Below is an example of what I do. I use social history to ‘fill in some gaps,’ and add questions to engage my audience, so they are thinking about what life was like for her.

My primary resources for were Irish history websites and newspaper articles from the period.  I won’t include the list of specific sources but can provide them if you are interested.

An extract of Hannah’s story

Plans are like dominoes. You can line them up but can’t control how they fall. Once they are in motion, anything can happen. Hannah Lyons spent the first 20 years of her life in county Kerry in rural Ireland. Like many others of her generation, her plans would have focused on marriage and having a family. During Hannah’s two decades it is probable that she never even left the County; never could she have imagined that her first adventure would take her to the other side of the world.

When faced with a once in a lifetime opportunity, Hannah decided to change her life. That choice was the beginning of her legacy of a family – more than eight hundred descendants spanning over six generations. Whatever led her to make that final decision, Hannah’s exploits would lead to her beginning her Australian family. It started with her eight children and flourished from there. Those eight children went on to produce 50 grandchildren and 114 great-grandchildren. It snowballed after that. Another four generations of great-grandchildren later, and the family continues to grow and add to Hannah’s legacy.

Hannah made a bold choice that would take her half a world away from her native Ireland, her family, and her friends. Was she excited by the opportunity? Eager for warmer weather? Did she have expectations of a better life? Whatever the deciding factor, Hannah Lyons said yes. In 1836, she joined hundreds of other women who would make a new life in the colony of Van Diemen’s Land.

History in the making

It was the trip of a lifetime. The colony was looking for domestic servants and brides for the large male population. A committee had formed in 1831 to facilitate the programme that would bring these young British and Irish women to these unfamiliar shores. Over the next five years, almost 3,000 women would take part in the emigration scheme. Never before had so many women been given such an opportunity. They left from Cork and London to spend their lives in the colonies. The vessels that carried them became known as the ‘Bride Ships,’ due to the volume of women on board. These women made their new homes in Launceston, Hobart, and Sydney. There they gained employment and married tradesmen, farmers, and other local men.

1836 was the coldest summer that Ireland had experienced in fifty years. Hannah may have been glad to leave behind the damp chill as she left her home, bound for London and the beginning of the journey. Together with her cousin Julia, they boarded the William Metcalfe in early October.

How did Hannah feel while standing on St Katharine Docks as she waited to join the ship? Excited? Anxious? Like a bold, modern young woman? Her father was a school teacher, so  Hannah may have had some education even though records indicate that she didn’t know how to write. Did she have dreams of educating the new colony?

A country girl from County Kerry, Hannah had no experience to prepare her for the voyage ahead. The William Metcalfe set sail on 6 October for a fifteen-week journey to Hobart Town. For most of the passengers, like Hannah, this would be the only major ocean voyage of their lives.

There was a doctor on board to treat illness, but the medication was often nothing more than a nip of rum or brandy; his presence wasn’t enough to prevent the death of over a dozen passengers.
Standard ship rations were available to feed those on board. When caught, fresh seafood or a porpoise supplemented the occasional meal. Other fresh food would have been in scarce supply, particularly in the later stage of the journey. Drinking water wouldn’t have been fresh unless they were able to restock during the regular storms.

Over the next three months at sea, the small and uncomfortable spaces would be only a part of the experience. The severe weather began almost immediately, a test for the passengers’ new sea legs. Rough seas and heavy squalls assaulted the ship as it pitched and rocked on the crashing waves. The rainy weather was unpleasant and would have forced the women to seek shelter inside.

Friendships were likely and disagreements unavoidable due to the confines of the vessel. One friendship Hannah made was with fellow Irishmen, Catherine, and James Jess. The ship separated the passengers by gender – the men were at the front of the ship and the women in the stern. Hannah would have met Catherine first. Likely the pair bonded over gossip of home, or as they entertained Catherine’s two young boys. It was to be an important friendship. It was James Jess who would later introduce Hannah to James Dwyer. Within two years, that man would become her husband.

After fifteen weeks at sea, the cry ‘Land! Land!’ went through the ship as the William Metcalfe approached its final destination. Did Hannah rush on deck for a glimpse of this new land? Did she feel relief that the end of the journey was finally in sight? Was it excitement that rushed through her at the thought of starting a fresh new life in Hobart? Or was it anxiety that left her feeling overwhelmed and unsure about whether or not she had made the right decision?

I imagine she felt sheer joy at the thought of standing on solid, unmoving land, even if it was foreign, while the glimpses of exotic trees and animals made her long for the familiarity of Ireland. I picture Hannah standing there on deck, clinging to her cousin Julia’s hand. Their faces filled with anxious anticipation and excitement as they prepared to step ashore.

On 24 January 1837, the William Metcalfe docked in Hobart Town. The passengers disembarked with relief, glad that the discomfort of life at sea was behind them. The bustle of the new town awaited, surrounded by an unfamiliar bush landscape. New scents, foods, and experiences were there for the taking. That one decision made so many months ago had opened up this new world for Hannah to explore. A new adventure began to unfold as she left the ship. Stepping off the gangplank onto the dock, Hannah walked towards Hobart Town and her new life.

I shared the above story with my niece who responded with: “I really, really loved reading it. She became so accessible through your words and is no longer just a name.” And that was my goal in writing about Hannah. To engage my nieces and nephews and for them to see our ancestors as people.

5 Responses to “Their stories, my words – writing my ancestors stories”