How To Find Research Clues In Your Family Mementos 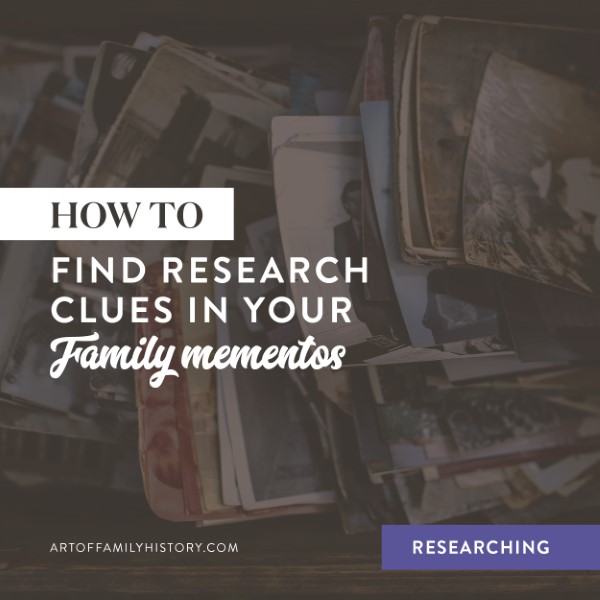 Have I ever told you the story about how I found my Great Uncle John?

He disappeared from the Australian record books after 1890. Vanished without a trace. Suddenly I wasn’t sure if I was solving an actual crime or if he was lurking in the records elsewhere. But where? And how could I find him?

So I worked the problem, looking in different states, census documents, and his siblings’ records. Trying every source that seemed likely and several that didn’t. And it wasn’t as though I didn’t have any leads. There were some significant clues. Such as knowing he died in the 13-year gap between the death of his father and mother. But when and where?

It took me almost 20 years to find out what happened to John Dwyer. My elusive, mysterious great uncle who never even knew that he was missing. And the research clues that solved the mystery were on a Christmas card from a distant cousin. The kicker? I’d had that card in my possession the entire time, for every single one of those 20 years. So how did I miss it?

I knew that letters contained many clues, but I didn’t consider that Christmas cards and other correspondence would too. Oh, I read them, but I didn’t READ them. All along the clue was there – ‘your grandfather went to Queensland and John to New Zealand.’ Boom. Four weeks later I had his death certificate and was looking for his descendants.

Researching in the internet age

Information has never been more accessible. There is an overwhelming amount of resources at our fingertips. Plus a plethora of people in forums and social media groups to offer suggestions and solutions if we get stuck.

So it can be too easy to fall into thinking that all the answers are online. And while a lot of them may be, we can’t get everything from the internet. Many of the best clues are in the memories and stories of our relatives.

That is why it’s so important to tap into those resources. Even if you think the stories aren’t 100% accurate, suddenly you have a starting point to find out more.

Would I have found John without that Christmas card? Maybe. Another New Zealand clue may have surfaced, but it hadn’t during the two decades I was looking. Now Ancestry bombards me with hints all the time about him because I told the search engine where to look.

If you follow me on Instagram, then you’ll know this is one of my favourite sayings. Capture the memories. Now. Today. Or at least as soon as possible. Because this step is an integral part of genealogy research, and to finding out your family stories.

When an old man dies, a library burns to the ground.
African proverb

Documenting family memories creates an invaluable resource for people researching your family line. That’s because memories are like butterflies. They are fragile, don’t last forever and can often be tricky to capture.

Take some time and create an inventory of the ‘extras’ in your collection. You will want to include everything that you’ve received or heard. Things such as

Use a spreadsheet like Google Sheets to create your inventory of research clues because it’s easy to filter or search. Something that will be a great time saver when you need to check a fact quickly. After all, who doesn’t want to save their future-self some time?

I also like that you can add columns at any point without having to reformat the document. Why give yourself extra work when you could be using that time for research instead?

With correspondence, use the sender’s name. For items, add in the name of the original owner or the person who gave it to you.

When it’s a letter or card, use the recipient name. For items, list all the owners that you know of, including yourself.

Where possible, this should be the creation date. If you don’t know, use the time you took possession of it because you can change it later.

Add in the name of the person who gave you the item. Maybe it was an aunt, your grandma or your Dad? It’s a handy thing to keep track of because it’s another story to tell your descendants.

I have multiple ‘fact’ columns, and I’m adding more all the time. Try and keep it to one point per column. Why? So then it is easy to skim and also gives you a list of leads to follow. Then you can work through one clue at a time, instead of getting stuck before you start.

I have a ‘verified’ column for each ‘fact’ column. I like to include the date that I found out if the fact was true or not. So I add a simple Y (or N) and the date. If the date doesn’t matter, skip this column and colour code the ‘facts’ instead.

It’s good to get into the habit of jotting down your thoughts as you research. I like to keep a ‘notes’ column, but you can always add in more ‘facts’ columns if you prefer. Then you’ll know exactly where you were up to next time you get back to the task.

The first step, once you have your inventory of clues, is to check your genealogy questions. You may find quick answers to some of your ongoing queries.

An example is when I wanted to know the origin of my Grand Uncle’s name – Arnold Denis Rainbow Dwyer. Pretty unusual for 1898, don’t you think?

The clue was from the Pioneer’s Wall in the Goondiwindi Cemetery. In the column next to their names, there were several people with the surname Rainbow. I knew my ancestors were locals at one point, and the dates were similar. Finally, I had a new lead in my mission to find out more about his name.

Names and places are the best research clues so start with those. That includes where the letters and postcards came from, so don’t forget to make a note of the postmark! Maybe your ancestor can be found in records in locations that you never knew to check.

Not every card or story will have a new lead for you. However, it’s amazing what you can find out when you collate everything together. You’ll start to see names on cards and photos match up with those from newspaper notifications, society columns and marriage certificates.

If you are lucky, then these clues may help smash through brick walls and answer theories you’ve had for decades. Or maybe prove the far-fetched family story is not such a crazy rumour after all.

What is the best clue you discovered on a postcard, photo or family memento?