This is a title test! 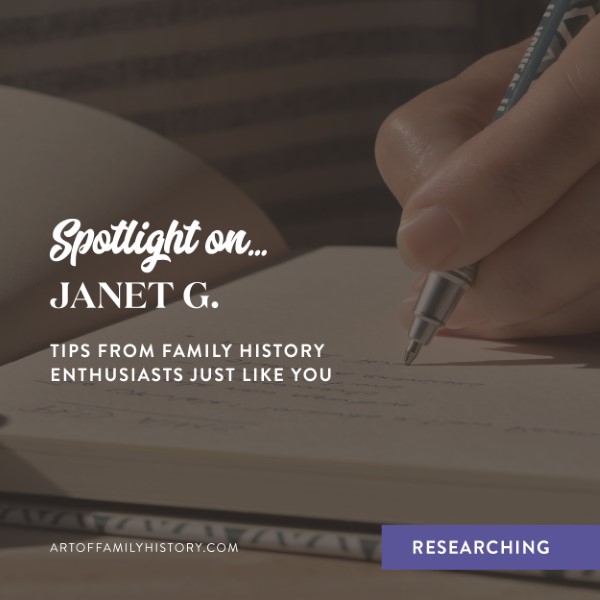 Twice a month, I publish a tip from a fellow family history enthusiast, someone just like you. They share something that they’ve learned over time which could be a time saver or brick wall breaker for others.

Today we shine the spotlight on Janet G, as she shares a fantastic trick she tried while on the journey to learn more about her father’s family.

Meet Janet. She’s from sunny Florida, USA. Her interest in family history started when she decided to find out more about her husband’s great grandfather. At the time she had no idea how addictive genealogy research was, and how elusive ancestors could be. Or that she’d still be looking for that particular great grandfather over 20 years later!

When she isn’t hunting for her own ancestors, Janet’s busy encouraging fellow family history enthusiasts to connect and communicate. Not only with each other but also with people in the area they are researching. Try reaching out to those with the same surname because you just don’t know what you might find.

Janet’s tip (in her words)

I was trying to research my father’s side of the family. He is deceased many years and I was not into genealogy before he died. I did know though that I had twin cousin’s in Germany and the city they were probably in – the same one my father had left from when he emigrated to the US. I looked at the German online phone book for all the people in that city with the same last name.

At that time I had someone who could translate a letter to German. I wrote the letter stating all that I knew about the family and that I was hoping to find those cousins. I imagine that now-a-days one could use the Google translator to do the translating. Letters were sent to all those people in that city with that last name and received MANY responses saying they were not related. I was very surprised and impressed that so many would take the time to let me know.

Then I received a response from someone who said he was NOT from my family but that he would search for them! Within a few days I received a letter from one of my cousins!!!!!! We corresponded and I planned a trip to Germany to meet her. In the meantime, I looked online for where I might be able to find documents for that family and emailed them. They found documents and when I went to Germany my cousin’s husband, who barely spoke English and I barely spoke German, drove me to the office to get the documents. The documents did cost me some money, but it was well worth it for the information I gleaned from them. Letter writing and emailing, even to strangers, does work!

Yes, yes, YES! This tip is gold. I’ve had a lot of success with searching the phone book and writing letters. Not only was I able to smash a stubborn brick wall but my snail mail requests ALWAYS receive a response. And if the recipient can’t help, they pass the letter onto someone who can.

Technology has changed the landscape of family history research. No longer do we need to leave the house to start learning about our ancestors. With our computers or smart devices, we can begin the journey in a couple of clicks from the comfort of the couch. So, no more trips to the library, archives or the odd visit to see a great aunt or uncle.

Our online worlds are noisy and filled with people with busy lives. So it’s easy for them (or us) to ignore both emails or notes via a genealogy site. Therefore training us to seek only answers, not collaborations.

And because we want the answers instantly, we ignore our offline resources. Resources such as the library, historical societies and people. Not only do these come with a time investment, but often a monetary one as well. After all, email is free and postage costs money.

So while our online inbox is full of spam, our physical mailboxes are empty.

Since I started investing in written letters and trips to the post office, I’ve smashed through brick walls. I’ve received a phone call or email for every letter I sent out. And every response has led to new information that I wouldn’t have found any other way.

Does Janet’s tip inspire you to contact others to look for answers about your ancestors?

Snag the FREE ‘Our Legacy’ Family Tree Letterhead for Google Docs too start corresponding with your distant cousins.

Do you have a story or tip (or two!) from your genealogy journey to share with your fellow family history enthusiasts? Take the ‘Spotlight On…’ survey and let me know

Want to read more about topics? Be sure to check out: 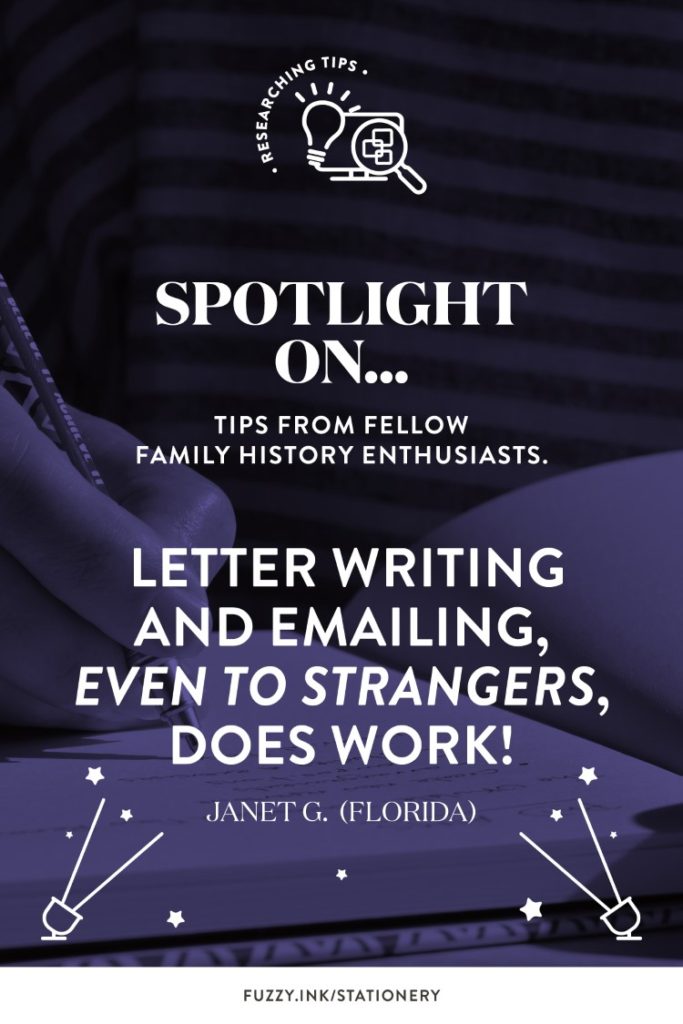 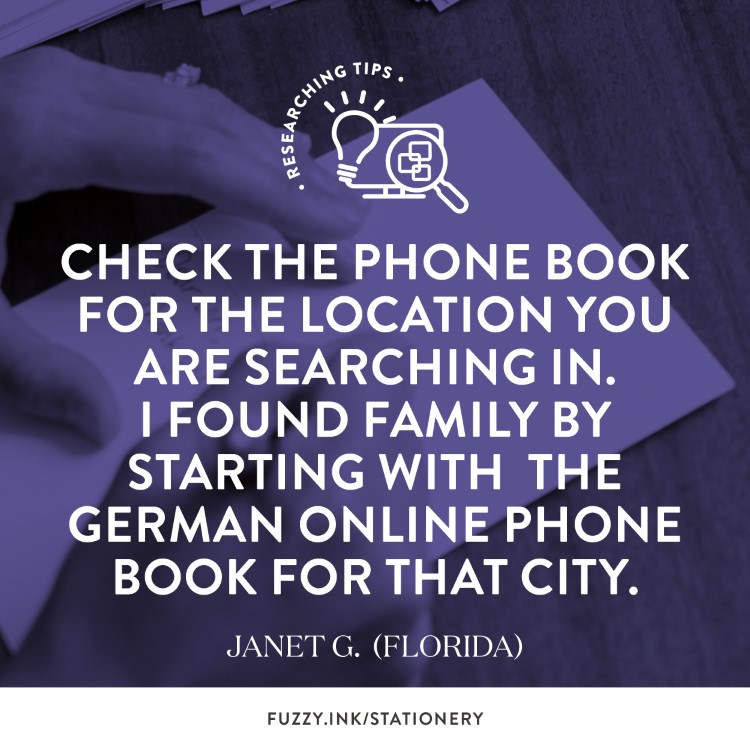 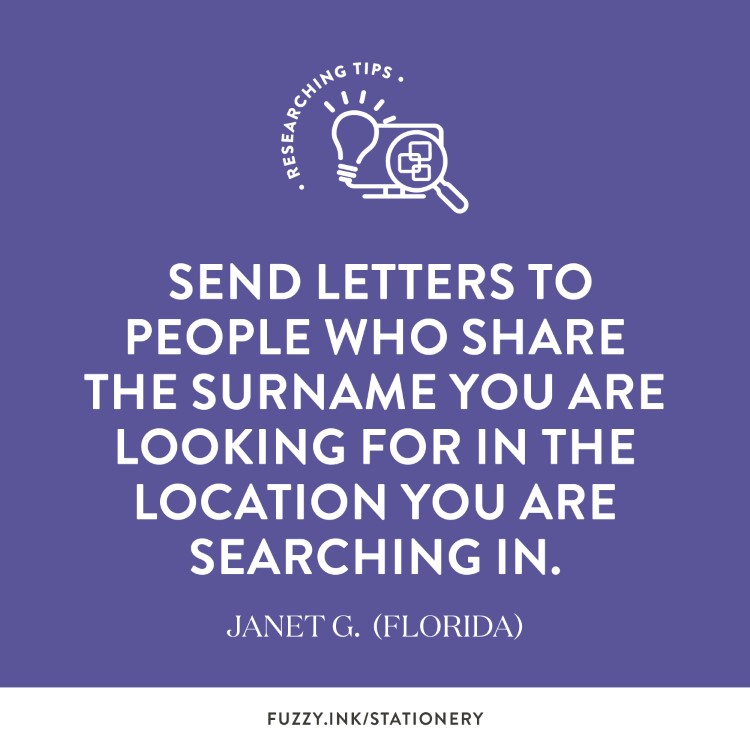 Up level your genealogy correspondence

An easy-to-use Google Docs template with a customisable family tree PLUS placeholder text to help you know what to say if you have writer's block.